Independence Program One of Many Innovations in 15 Years

FAYETTEVILLE, N.C., June 11, 2018 /PRNewswire-USNewswire/ -- Talking to John Goubeaux is a lesson in positivity, but it almost wasn't. John nearly died seven years ago. He will forever have the scars from that day – visible and invisible. 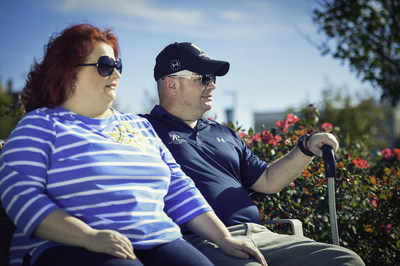 During a steaming summer day in 2011, as he stood on the back of a truck working on a plane, the stifling heat overtook the Air Force veteran. He fell, landing head-first on concrete, shattering part of his skull.

"First, they had to resuscitate me," John said. "They removed part of the skull to gain access to the source of the problem."

John is lucky to be alive, and he knows it.

"I don't take anything for granted," he said.

John still lives with a severe traumatic brain injury that slows down his life and has him relying on Vicky to be his caregiver.

WWP also brought John into its Independence Program, an innovative approach to help the most seriously wounded veterans and their families. Independence Program helps veterans with moderate to severe brain injuries, spinal cord injuries, or neurological conditions. WWP knows warriors can achieve a life worth living when given the right support. Goals are set, and a plan is made to achieve them.

"Before Wounded Warrior Project, I never took the stairs," John said. "My coach asked, 'why not?' So, we worked on it."

Step-by-step, John relearned the task and built his stamina.

"About a year ago, the elevator was out at the doctor's office, and that was a big win for me to be able to walk down three flights of stairs.

"I have a second shot at life," John said. "I had everything taken from me, and now I am getting it back, gradually."