NEW YORK, June 16, 2017 /PRNewswire/ -- At the 2017 Courage Awards and Benefit Dinner, Wounded Warrior Project® (WWP) recognized warriors and partners who have dedicated time and effort to change the lives of the warriors served by WWP. Army veteran Brett Miller, who was seriously wounded in 2004, received the highest honor for the evening. 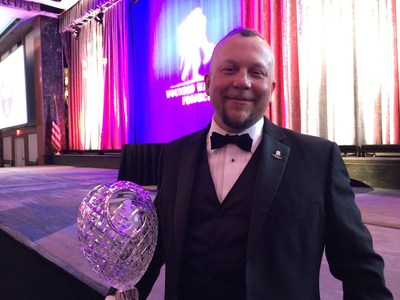 The Courage Award is given to a warrior who embodies the values of WWP. The most humbling part of the award, Brett said, was who chose him to be the recipient.

"It's something that's chosen by your peers," Brett said. "To be chosen among the peers here in this room is unbelievable. I'm beyond honored."

Part of the reason Brett was chosen is his hard work and dedication to those around him, even while managing injuries sustained during his time in the Army.

"I was conducting security operations when a roadside bomb went off six feet from the door of our Humvee," Brett said. "I smelled sulfur, and the sky went black. It all goes blank for me from there."

The impact shook Brett with such force that he suffered a traumatic brain injury, brain bleed, and multiple other wounds. It rendered Brett paralyzed on his left side. During his recovery, he was diagnosed with post-traumatic stress disorder, which he described as "a fit of mental rage."

"Several years ago, I saw a need in the Pacific Northwest," Brett said during his acceptance speech. "My deal was hunting and fishing, so I thought, 'let's get some more trips started.' It's what I knew how to do; I could hunt, and I could fish, so I wanted to get these guys out. I learned more in the last several years of guiding disabled veterans than I thought I could ever learn. And the only reason I was able to do that was because Wounded Warrior Project honored and empowered me."