A Life of Challenge and Adventure: 11 Facts About Service Woman Cathay Williams 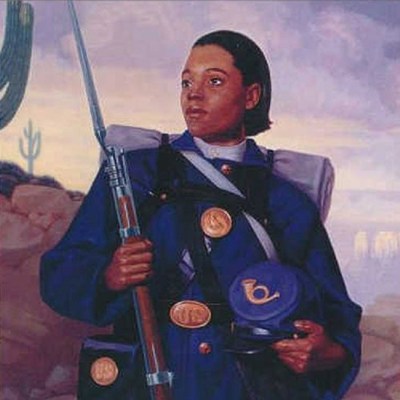 "I wanted to make my own living and not be dependent on relations or friends." – Army service woman, only known female Buffalo Soldier Cathay Williams

1. Family Tree – Cathay was born in September 1844 to a free father and a slave mother.

2. An Undisputed Place in History – Cathay is the first documented black woman to enlist in the Army.

3. What's In a Name? – She enlisted as "William Cathay" by swapping her first and last name: Cathay Williams.

4. An Honorable Deception – How was Cathay able to disguise herself as a man to enlist in the Army? In 1866, the Army did not require medical exams for enlistment. It took more than five hospital stays at four different hospitals for her gender to be discovered. She served from 1866 to 1868.

5. Larger Than Life – At a statuesque 5 feet 9 inches tall, Cathay was one of the tallest service members in Company A of the 38th Infantry.

6. Undeniable Valor – The 38th U.S. Infantry was one of six all-black Army units authorized by Congress in 1866. The Plains Indians gave the group its legendary name: The Buffalo Soldiers. Cathay  is the only woman known to serve with the heralded group.

7. An Unjust System – Although she was plagued by poor health and received an honorable disability discharge, Cathay was denied a pension. According to the Army, there was no proof of disability.

9. Her Own Words – In 1875, a St. Louis journalist tracked Cathay down for an interview and published her tale of secrecy and heroism in 1876.

10. Holding On To Independence – After being discharged, Cathay briefly helped her mother Martha Williams run an orphanage in Pueblo, Colorado.

11. A Life of Adventure Ends – Cathay managed a boarding house in Raton, New Mexico, until her death in 1924.