JACKSONVILLE, Fla., April 20, 2022 /PRNewswire/ -- Wounded Warrior Project® (WWP) today held a news conference outside its Jacksonville headquarters to advocate for Congressional passage of a bill to help veterans exposed to toxic substances while serving our country. The comprehensive legislation – the Honoring Our PACT Act – is pending in the U.S. Senate and would ensure that veterans who get sick due to toxic exposures get the care and benefits they need and deserve. 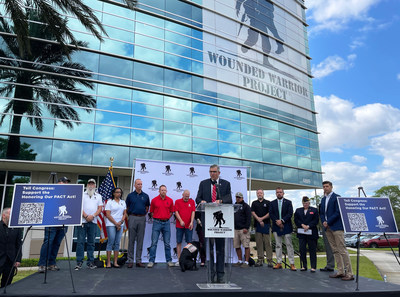 "Keep the drumbeat going. Contact your Senators. Tell them to pass the Honoring Our PACT Act," WWP CEO Mike Linnington.

"For years, millions of post-9/11 veterans were exposed to open-air burn pits," Wounded Warrior Project CEO Lt. Gen. (Ret.) Mike Linnington said at today's event. "The military used burn pits to dispose of trash, spent munitions, equipment, and pretty much everything needed in often remote theaters of operation. These burn pits often resulted in huge plumes of black, toxic smoke that many servicemen and women then inhaled into their bodies."

"These prolonged exposures have serious health consequences – cancers, disabling respiratory conditions, and other illnesses," Linnington explained.  "And far too many who are suffering still lack access to the health care and benefits they need because they can't prove that their health problems are connected to their service. This cannot continue."

Linnington announced that WWP is sending e-mail action alerts to more than 200,000 warriors and family support members in its network. The action alerts will directly connect citizens with their U.S. Senators, who will decide the future of the Honoring Our PACT Act. The U.S. House of Representatives passed the bill in bipartisan fashion on March 3.

Learn more about the Honoring Our PACT Act here.

Linnington was joined at today's event by dozens of area veterans and Jacksonville-based WWP staff. Army veteran Andrew Myatt of Arlington, Virginia, talked about his personal experiences with toxic exposures, as well as the serious health impacts that he's witnessed among his fellow former service members.

"I didn't initially connect my cancer to my time in the military, even though I had skin rashes and coughed up brown stuff for years after returning to the states," said Myatt. He was diagnosed with rare leukemia in 2019 after a routine physical. "I was fortunate to have good health care from my job … but many veterans don't have that access to health care. That's why this bill is so important," he said.

"We have to keep the drumbeat going," Linnington concluded. "More citizens need to contact their Senators and tell them to pass the Honoring Our PACT Act before Memorial Day. Anyone can do that by visiting our website at WoundedWarriorProject.org." 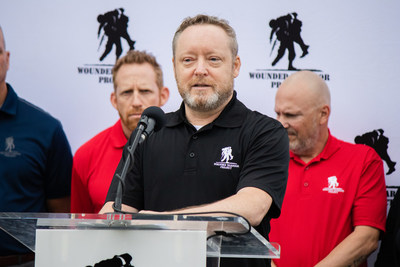