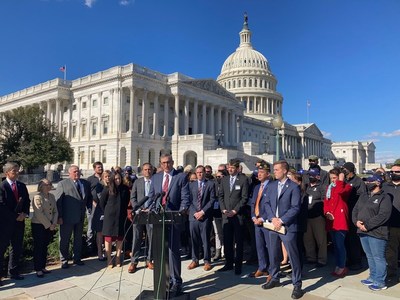 "Now is the time for Congress to honor all who served and sacrificed," said WWP CEO Lt. Gen. (Ret.) Mike Linnington.

"It's been over 20 years since an act of terrorism launched the United States into our nation's longest war," said WWP CEO Lt. Gen. (Ret.) Mike Linnington. "This resulted in the deployment of nearly 3.5 million men and women in uniform. More than 7,000 of them never came home. Countless others still battle with the visible and invisible wounds of war. Now is the time for Congress to honor all who served and sacrificed."

WWP coordinated the attendance of more than 30 post-9/11 veterans at today's event on the U.S. Capitol lawn in Washington. They were joined by U.S. Sens. Maggie Hassan (D-N.H.) and Joni Ernst (R-Iowa) and U.S. Reps. Jared Golden (D-Maine), Jason Crow (D-Colo.), Mike Gallagher (R-Wis.) and other lawmakers. All support legislation to authorize construction of the GWOT Memorial in the centrally located "Reserve" area of the National Mall.

"This Memorial is necessary to honor the service of everyone who helped protect America during our nation's longest war," said Army Veteran Claude Boushey. "It should be built on the central core of the National Mall near the existing memorials honoring the sacrifices made by the veterans of World War II and the Korean and Vietnam Wars."

Global War on Terrorism Memorial Foundation CEO Marina Jackman echoed the sentiment. "As we mark 20 years since Sept. 11, this year has refocused the nation's attention on our veterans' service and their stories. Now, more than ever, the service community needs a place where we all can come together to reflect, heal, and honor the sacrifices made by this generation of warriors. The right place for this memorial is on our National Mall, the sacred space where we as Americans gather to remember those who have served."

On Sept. 23, the U.S. House of Representatives passed H.R. 4350, the National Defense Authorization Act (NDAA) for fiscal year 2022. That legislation included language to authorize the construction of the GWOT Memorial within the "Reserve" area of the National Mall. The U.S. Senate is considering its version of the NDAA bill. Veterans and Gold Star family members at today's event called for the Senate to include the GWOT Memorial language in its bill.

"I want to thank Senators Hassan Ernst, and Congressmen Golden, Crow, and Gallagher for their leadership on this important issue. Now it's up to the full U.S. Senate to authorize this Memorial so it can be built in a central part of the Mall. Future generations should be able to learn about the Global War on Terrorism and honor the sacrifices of those who served, fought, were injured, or were killed in America's longest war," Linnington said.