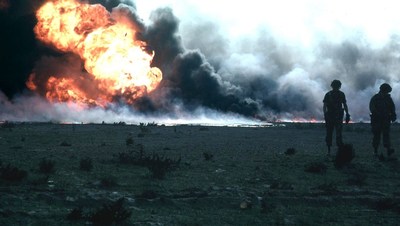 For nearly two decades, post-9/11 veterans have been exposed to contaminants such as burn pits, toxic fragments, radiation, and other hazardous materials on deployments to Iraq, Afghanistan, and elsewhere. Now, many of them are experiencing severe, rare, and early-onset health conditions.  Since these illnesses often do not manifest until years after discharge, many veterans struggle to obtain health care and benefits from the Department of Affairs (VA) in connection with these conditions.

This legislation will expand health care eligibility and create a framework for establishing presumptive service connection for all military toxic exposures, now and in the future.

Read the Senate and House versions of this legislation.

The TEAM Act will:

"Wounded Warrior Project believes that veterans of all eras who suffered toxic exposures deserve access to lifesaving health care and a system that requires VA to respond to scientific data in a timely, transparent manner," said WWP Government Affairs Specialist Aleks Morosky. "This forward-thinking legislation would set those standards for all military toxic exposures, now and in the future. We are proud to endorse the TEAM Act and stand alongside Senators Tillis and Hassan, and Representative Bost in their commitment to this urgent issue."

Learn more about WWP's other legislative priorities and how we work with our nation's leaders to improve the lives of wounded veterans and their families.