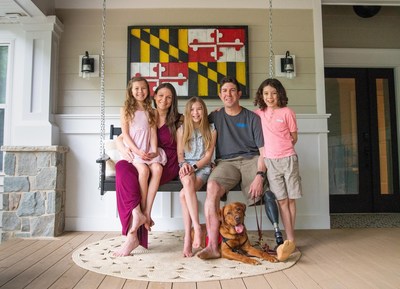 "I'm honored to have played a role in the passage of this important law," said Ryan Kules, WWP Combat Stress Recovery Director. "Wounded veterans should have the peace of mind of knowing that wherever we choose to live, we will have that opportunity without bearing large additional financial burdens for home adaptations. I'm thankful for all who helped make this critical reform become a reality."

"The Ryan Kules and Paul Benne Specially Adaptive Housing Improvement Act of 2019 was a major priority for our organization, and we're grateful for the leadership and tireless support of bill sponsors Sen. Jerry Moran and Rep. Gus Bilirakis and co-sponsors Sen. Kyrsten Sinema and Rep. Mike Levin," said WWP CEO Lt. Gen. (Ret.) Mike Linnington. "We thank the Congress and the President for passing and enacting this critical reform. This was an incredible multi-year effort led by our Washington, DC team. We are specially honored and appreciative to have been joined by warriors from across the country, who gave their time and effort on Capitol Hill — calling Congress, sending letters, speaking to members of Congress in person, and making their voices heard."

The bill was first introduced in the U.S. House of Representatives in June 2019 and named after Army Captain (Ret.) Ryan Kules. The bill was later amended as the Ryan Kules and Paul Benne Specially Adaptive Housing Improvement Act of 2019, to honor Kules and Army Colonel Paul Benne who passed away in December 2019, before the bill was signed into law.

In 2005, Kules’ unit was returning to base in Iraq when his vehicle hit an improvised explosive device (IED), resulting in the amputation of his right arm and left leg. Kules and his wife were able to use a VA grant to adapt their first home, but when the growing family needed a new home they had to start over and faced thousands of dollars in adaptive improvements to make the space livable. The new law increases funding and allows eligible veterans to use the benefit every 10 years. Kules championed the bill and continues to advocate for other veterans in his role leading the Combat Stress Recovery program at WWP.

Read more in this article in Connecting Vets. The passage of the bill was a major legislative priority for WWP during the 116th Congress. Learn more about WWP's legislative priorities and how we work with our nation's leaders to improve the lives of wounded veterans and their families.