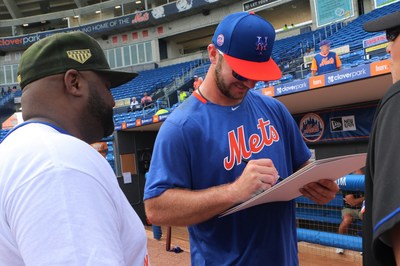 All four warriors live in Florida but are New York City natives.

"I've always been a Mets fan, so it was a dream come true," said Marine veteran Lyndon Ortiz.

Alonso donated $50,000 to WWP after winning the Home Run Derby as a rookie at the All-Star Game last summer.

"To be so young — a new, rookie player — and to step on the stage the way that he did and to bring attention to an organization like Wounded Warrior Project…it's just unbelievable. He's so humble," said Army veteran Chris Gordon.

"He's a young man who was raised right," said Army veteran Jeanette Nieves-Ayala. "His family must have instilled in him to give back. And the fact that he chose veterans…I feel that. I think that's an incredible choice for him."

"To know we're still on players' minds, on peoples' minds, and we're not forgotten…it's a true blessing," Javier said.

You can join Pete in giving back to wounded warriors and their families. Warriors never pay a penny for any WWP program or service — because they paid their dues on the battlefield.