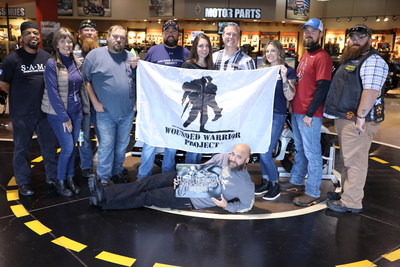 Rolling Project Odyssey is a unique motorcycle group riding experience that aims to support veterans in their recoveries from invisible wounds of war. First partnering with WWP on the experience in 2015, Harley-Davidson is sponsoring additional group rides to extend the program to more veterans across the United States.

"We are grateful for Harley-Davidson's support and honored to partner with such a legendary brand as we fuel the future of Rolling Project Odyssey," said Lt. Col. (Ret.) Michael Richardson, WWP vice president of independence services and mental health. "Our goal is to focus warriors on their present to enable the growth of their future. The overall Rolling Project Odyssey experience is designed to encourage warriors to face adversities of the past and accomplish goals together with peers facing similar challenges, just as they did on the battlefield."

Warriors at Project Odyssey enjoy the camaraderie of engaging with their fellow veterans who have similar interests and experiences. Activities like motorcycle riding and socializing with other veterans provide an opportunity for warriors to connect and expand their support network. In a WWP survey of the wounded warriors it serves, warriors expressed they address their mental health concerns by talking to fellow veterans (41%) and physical activity (30%). A review by the U.S. Department of Veterans Affairs notes that "veterans with better social support have more positive mental health outcomes, including lower rates of suicidal ideation."i

Through Rolling Project Odyssey, veterans also experience the joys of motorcycle riding. A 2019 neurobiological study conducted by a team of three researchers at UCLA's Semel Institute for Neuroscience and Human Behavior and funded by Harley-Davidson concluded that:

"Supporting the military is ingrained in our brand's 117-year legacy, and we take pride in working with organizations such as Wounded Warrior Project so together we can positively impact the lives of those who served," said Jon Bekefy, general manager of brand marketing at Harley-Davidson Motor Company. "We support the goals of Rolling Project Odyssey and are excited to share with our country's service men and women the joys of motorcycle riding and the attributes that are synonymous with two wheels – community, support, and personal freedom."

The first Rolling Project Odyssey of 2020 will take place March 9 -13. The journey will start and finish in Jacksonville, Florida, where WWP headquarters are located, and feature a stop in Daytona for Bike Week, which kicks off riding season in the U.S. each year. Learn more about WWP's Project Odyssey program.