JACKSONVILLE, Fla., Dec. 10, 2019 /PRNewswire/ -- Christian McCaffrey has been a blur this season, an apparition to the opposition. But while the Carolina Panthers star may be hard to spot for defenders, McCaffrey hopes the images on his cleats from a recent game stay in the minds of both foes and fans. 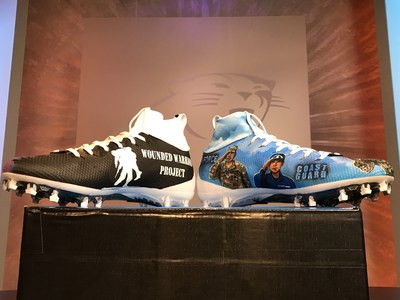 McCaffrey is one of nine NFL players who displayed the Wounded Warrior Project® (WWP) logo on their cleats as part of the NFL's #MyCauseMyCleats campaign. The annual initiative allows players to raise awareness for a nonprofit organization by sporting that charity's logo on their cleats.

McCaffrey also enlisted the help of USAA, the official NFL Salute to Service partner, to give warriors a behind-the-scenes tour of the Panthers' stadium and team facility in Charlotte.

"It really hit me when they told me that watching football is their getaway," McCaffrey said. "You want to put on a show for them; it makes football more than a game."

Denver Broncos defensive lineman Mike Purcell also chose to honor wounded veterans and their families with the WWP logo on his cleats.

Supporting a veterans charity on his cleats resonates with Jacksonville Jaguars defensive lineman Abry Jones, whose parents both served in the Army.

"Wounded Warrior Project is very important to me," Jones said. "I want to give back to them as much as I can."

You can join Jones, Purcell, McCaffrey, and the six other players by giving back to wounded warriors. They never pay a penny for any WWP program or service because they've paid their dues on the battlefield.

The Miami Dolphins are also supporting wounded veterans. A portion of every ticket purchased through this site for their Dec. 22 game against Cincinnati will help provide life-changing services to warriors and their families.