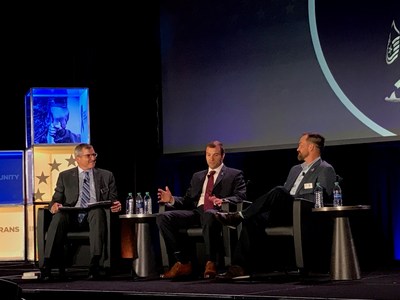 The conversation focused on their own military service and transition into the civilian workforce, and what advice they would give other veterans embarking on their own transition.

"What I very quickly realized was that those skills I had in the military that I thought wouldn't translate over, because who needs a guy who can shoot a rifle and carry a heavy load on their back?" said Romesha. "I got to the North Dakota oil fields and started doing my job. Within less than a month I got my license and was driving a truck. Within months of that, I was managing 8 of those trucks, because they saw my leadership traits."

"To this day I'm still in transition," said Giunta. "I'm a senior at Colorado State; it took me six years from the time I got out of the military, to use the GI Bill. It's only a benefit if you use it. I had the opportunity to go to school, and that's my next transition. One thing the military instilled in me was make yourself useful and you'll have a job forever, because people will use you. My transition story is not over, and I don't think it will ever be over. The opportunity to grow, expand and make yourself useful is around us every single day."

Giunta and Romesha also shared what receiving the Medal of Honor meant to them, and the weight of shouldering the responsibility of what it represents.

"Getting the medal, it's such an abstract idea that you kind of get thrust into overnight," said Romesha. "We lost eight guys that day; they're not able to be up on stage to share their story anymore. If we as veterans aren't doing it, who's' going to tell these stories and share it for them? Yeah, it's a heavy burden, but I every time I can get up and talk about those guys, I get to put that burden on everyone who is listening to help share it, and carry it with me."

"I know what the medal costs – it cost me nothing, but it cost a lot of people absolutely everything," said Giunta. "When I gave the medal to my unit, it was a heavy responsibility that I was carrying, and it was an identifier. My life didn't change October 25th in combat, that was just another day at war. My life changed through that recognition; and I'll say it until I'm blue in the face every single day – it's not just me, it's us. I needed to take the medal off and give credit where credit was due."

To watch the full panel discussion, visit America's Warrior Partnership on Facebook. And learn more about how WWP has granted more than $88 million to 165 veteran and military service organizations involved in the care of America's military community since 2012.