SAN DIEGO, Aug. 26, 2019 /PRNewswire/ -- Through a cloudless sky, the sun shone on supporters of wounded veterans and their families in San Diego's NTC Park during the Wounded Warrior Project® (WWP) Carry Forward® 5K, delivered by CSX®. 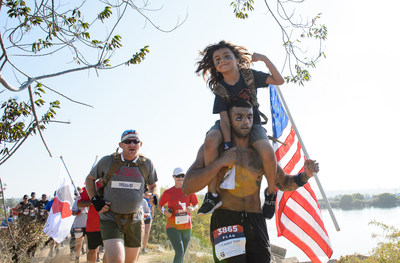 The conditions were perfect for emcee and ABC 10 News meteorologist Angelica Campos, whose husband serves in the Marines.

"It just warms your heart and just reminds you that we have great people and great humanity and so many great San Diegans that come out and do a 5K for a good cause," Angelica said.

For the next hour and a half, supporters began to return to the finish line. Families, teams, veterans, even a participant dressed as a stormtrooper completed the event as they all supported our nation's heroes.

Reece Jensen, one of the top fundraisers for the San Diego event, has participated two years in a row.

"It's fantastic," Reece said. "It's a great group of people; it's a great charity. We love doing it every year, and we'll be doing it for a long time."

Over 700 people participated in Carry Forward San Diego in 2018. That number more than doubled this year.

"Seeing more than 1,500 people support wounded veterans and their families speak to the character of the San Diego community and its powerful connection to our military," said WWP CEO Lt. Gen. (Ret.) Mike Linnington. "I can't wait to see the same passion to honor and empower wounded warriors in other cities as we've seen here in San Diego."

Carry Forward will carry on in:

Want to help put the mission to empower wounded veterans in motion?

Visit the Carry Forward website, and sign up at one of the three remaining locations or register your virtual squad today!

Since 2003, Wounded Warrior Project® (WWP) has been meeting the growing needs of warriors, their families, and caregivers – helping them achieve their highest ambition.