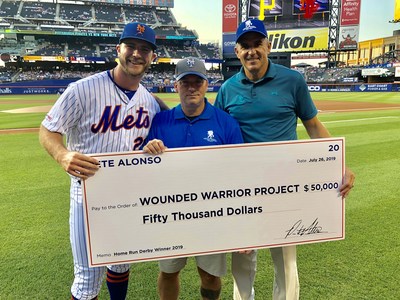 "A bad day at work for me is getting booed off the field, going 0-for-4, making errors," Pete said. "But I can't even imagine what a bad day at work is for people who put their lives on the line every single day. I just have the utmost respect for those people."

Wounded warriors and WWP leadership joined Alonso Friday night for a presentation at Citi Field during the Mets' first homestand since the derby.

"We want to express our gratitude to Pete and the Mets organization for an incredible night," said WWP CEO Lt. Gen. (Ret.) Mike Linnington. "His performance at the Home Run Derby directly impacted the lives of veterans and their caregivers, and it will allow them to take the next steps in their journeys to recovery."

"It's extremely sad some people have to lose their lives but people don't see the scars that are left after that with the families. It's all for them," Pete said. "It's to help anyone who's affected by it. It's not just the people directly involved; it's to help the families as well."

Pete's donation to veterans will support WWP's efforts to continue to improve the lives of millions of warriors and their families across the nation, including in his new home state. Earlier this month in Manhattan and Long Island, more than 1,200 community supporters cycled with wounded veterans in the 16th annual Soldier Ride® New York.

Learn more about Wounded Warrior Project and how you can support warriors.