MACON, Miss., July 1, 2019 /PRNewswire/ -- Through sweltering heat, a group of veterans and supporters kept the memory of Army Sgt. Travis Cooper alive during a 22-mile hike recently in eastern Mississippi. 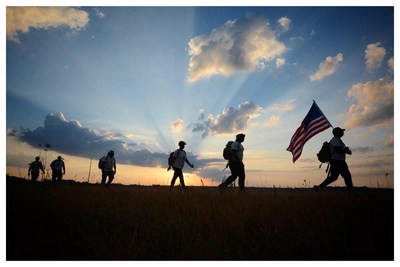 "It spoke volumes for them to go to that extreme," said Travis' aunt Levon Cooper-Grace.

Travis died after his vehicle ran over an improvised explosive device while serving in Iraq in 2005.

"I can recall being awakened in the middle of the night to this horrible news," recalls Selethia Malone, who had dated Travis since they were in 7th grade. "I was in a very depressive state and felt as if I had a horrible dream and that things would be OK the next day. However, it was all reality."

Those memories of Travis' death remain, but so does his outgoing spirit. It was in every step of that 22-mile hike, and in an emotional culmination: Wounded warrior Melvin Gatewood and other veterans presented Travis and Selethia's 12-year-old son Tarian with an American flag, a touching tribute to a father he never got a chance to meet because he was stationed overseas.

"It was a bittersweet moment because tears of joy began to fall," Selethia said. "It was an honor seeing my son hear about the great things that his father has done for this country and to also hear of the impact that he had on so many of his fellow soldiers" — soldiers who are making sure his memory won't fade.

"God places very special people in place to commemorate and honor those who have sacrificed their lives," Selethia said.

In addition to remembering their fallen comrade, the group hiked in honor of the 20 veterans and active-duty servicemen and women who commit suicide every day.

"Often the war comes back home with veterans after combat, and they cope with these memories differently," said Melvin, who served with Travis in Iraq.

To learn about these programs and to support wounded veterans, visit https://wwp.news/Donate.