ORLANDO, Fla., Feb. 14, 2019 /PRNewswire/ -- Wounded veterans took the field with some of the best football players in the world recently as part of Pro Bowl weekend. Wounded Warrior Project® (WWP) connected more than 50 veterans and their families with help from the NFL. 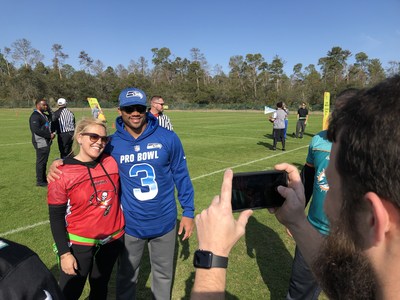 "It's been great; a lot of these guys have been through a lot more than I have," said Army veteran Ernesto Jimenez.

But the veterans were not alone on the field. Ten NFL Pro Bowlers including Russell Wilson, Alex Mack, Anthony Sherman, and others surprised the group and joined in the on-field fun.

"I caught two passes from Russell Wilson," said Kate Dopp, wife of an Air Force veteran. When asked how it was, a simple response: "Amazing! The highlight of my year."

Veterans and NFL stars competed in flag football matchups on two fields at Disney's ESPN Wide World of Sports Complex. The games featured lots of scoring, and lots of highlights for the warriors, including one veteran intercepting a pass from an NFL quarterback.

"I caught a pick from Russell Wilson," Ernesto said. "It felt pretty good; I didn't think I was going to catch it. I guess he misread it; he threw it right at me."

"This is really cool," Kate said. "I'm happy players came out to support the veterans like my husband, who have sacrificed so much."

Besides NFL support, veterans experienced the camaraderie they once had while active-duty military. WWP knows about the challenges post-traumatic stress disorder (PTSD) and other invisible wounds of war create as a veteran transitions to civilian life. Events like this flag football game encourage getting out of isolation and overcoming difficulties. It also gives veterans a chance to learn about the free programs and services provided by WWP.

Since 2003, WWP has been a tireless advocate for our nation's finest, improving the lives of millions of warriors and their families. Learn more and get involved at https://wwp.news/GetConnected.