JACKSONVILLE, Fla., Dec. 11, 2018 /PRNewswire/ -- The Greenwave Vets showed their support with a 5K around a high school track, after the school's football team's final home game on a Friday night, in the rain.

Military Moms Across America gathered on a Saturday morning around an Ohio reservoir.

In Michigan, a supporter marched in the snow.

In France, a servicemember signed up to back veterans back home.

Across the country and the world, nearly 1,400 people registered for Virtual Carry Forward™, a unique 5K fitness challenge by Wounded Warrior Project® (WWP). Carry Forward, delivered by CSX®, asks participants to either carry a flag, a weight, or a person.

Mitch Green helped lead the group of veterans running and walking in the rain in Malden, Missouri. The Greenwave Vets started with five veterans, but quickly got the support of their community.

"People started asking me when, where, how," Mitch said. "Some of us made T-shirts; others made teams. For our last home football game, we all met in the rain and cold and started walking."

Neighbors and businesses came together to rally for warriors, either walking, running, or supporting from the stadium seats.

"A friend does the announcing at the games, so I gave him information on teams and veterans issues; he would read off some every few minutes. We had a blast."

WWP launched Carry Forward in October with local events in San Diego and Nashville. More than 1,700 people participated. In November, more than 2,000 showed up to support veterans for Carry Forward Jacksonville, near the veterans charity's national headquarters.

Virtual Carry Forward gives individuals and squads a chance to participate where ever they are until December 15. All 50 states and Washington, DC are represented in the virtual event.

"All of my family served in the military. Not backing them is not even something I think of. As a nation, so many people are willing to give up a normal life for the honor of serving."

To learn more about how the veterans charity is transforming the way America's injured veterans are empowered, employed, and engaged in our communities, visit https://wwp.news/GiveBack. 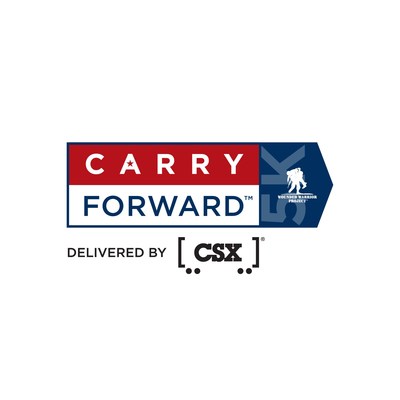