JACKSONVILLE, Fla., Sept. 27, 2018 /PRNewswire/ -- Wounded Warrior Project® (WWP) announced new leadership on its volunteer Board of Directors. The board elected Dr. Jonathan Woodson as its Board Chair and Kathleen Widmer as Vice Chair. 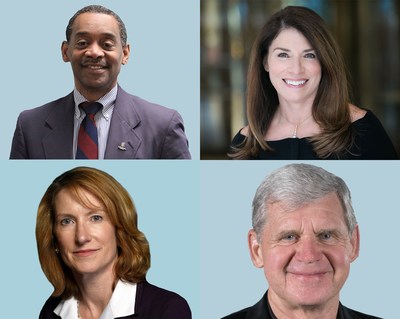 Widmer joined the board in August of 2017. She has served as President of Johnson & Johnson Consumer, OTC Division since 2015. That division makes over-the-counter drugs like Tylenol©, Sudafed©, Motrin©, and Benadryl©. Widmer graduated from the United States Military Academy at West Point in 1983 and served five years in the U.S. Army.

WWP also welcomes two new members to its board with the appointments of Lisa Disbrow and Michael Hall. Both bring decades of experience in military, government, and corporate leadership, which will help WWP continue to meet the needs of wounded, ill, and injured service members, and achieve its mission of honoring and empowering wounded warriors.

Command Sergeant Major Michael Hall had served 32 years on active duty leading DoD special operations on five continents when he retired in 2008. He was called back to duty for one last tour in 2009 – Afghanistan – serving as the top enlisted leader for all NATO forces in the International Security Assistance Force, North Atlantic Treaty Organization Afghanistan/United States. CSM Hall retired from active duty with more than 33 years of distinguished service.

"These additions to our Board of Directors will increase Wounded Warrior Project's ability to positively impact the lives of the warriors and families we serve – through recovery and rehabilitation, and throughout their transitions to civilian life", said WWP CEO Lt. Gen. (Ret.) Mike Linnington. "Lisa Disbrow and Michael Hall have decorated military careers, and now their experience will support warriors as we meet them where they are on their journeys to recovery."

With the addition of these two members, WWP is also bidding farewell to two long-term board members who have reached their board term limits:

Capt. (Ret.) Anthony Odierno joined WWP's board in 2009, serving nine years in positions of responsibility, most recently as Board Chair. Odierno's inspiration through his personal recovery from battlefield wounds sustained in 2004 in Iraq, and as Board Member/Chair, has been instrumental in the growth of WWP, which has improved the lives of millions of warriors and their families worldwide. Roger Campbell also joined WWP's board in 2009, most recently serving as Vice Chair. Campbell's long service has been instrumental in helping warriors achieve their highest ambitions. WWP thanks Odierno and Campbell for their continued support of wounded veterans around the nation.

WWP also says goodbye to Ken Fisher, who is leaving the organization's Board of Directors after two years of valuable service. Fisher's keen insights, at a time of significant transformation, have helped immeasurably. WWP is grateful for his dedicated service.

WWP's board comprises individuals with experience in military, business, nonprofit, government, and medical fields, and with varying educational backgrounds. The board regularly evaluates its composition to ensure it includes the appropriate skills, experience, and perspective necessary to fulfill its support of WWP's mission to honor and empower wounded warriors. Since late 2016, WWP has grown its board by electing nine directors, all with diverse backgrounds.

Learn more about the board at https://www.woundedwarriorproject.org/mission/board-of-directors.

Since 2003, Wounded Warrior Project® (WWP) has been meeting the growing needs of warriors, their families, and caregivers – helping them achieve their highest ambition. Learn more: http://newsroom.woundedwarriorproject.org/about-us.