Veteran Heals By Helping Other Warriors On Their Journeys

WASHINGTON, Aug. 2, 2018 /PRNewswire/ -- Army aviator Claude Boushey knows a thing or two about being there for his fellow service members. After surviving a helicopter crash in Iraq, he returned to serve in combat operations just 18 months later. 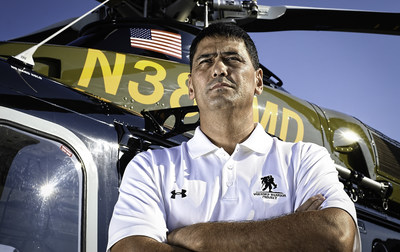 Claude and another pilot went down in Iraq in June of 2004. The impact was devastating. Doctors initially told Claude's family he might not make it.

"I compressed my spine, pretty much broke my back and leg. At the time, I didn't know my leg was broken. I also crushed my knees into the dashboard as it came off in the helicopter. As we impacted, it rolled on top of me."

Claude survived but was told he would never walk again.

"After 15 months of recovery, I was back in the cockpit and flew again."

But Claude's struggles started before he could get back in the cockpit.

"When I was in the hospital, I didn't have anybody to reach out to. I didn't want that to happen to anyone else."

WWP Peer Support Groups help injured veterans know they are not alone. Through coming together, warriors bond and build their own support structures. Warriors also benefit as they grow in the program and become empowered to mentor other wounded veterans.

"Wounded Warrior Project was so gracious to give me Peer Support Group training, so that's been my mission to empower those warriors who need it the most."

Claude has reached new heights by serving other veterans.

"It helps me with my recovery. It helps me deal with the emotional and mental issues I go through while recovering. When you help others, you help yourself."

Since 2003, Wounded Warrior Project® (WWP) has been meeting the growing needs of warriors, their families, and caregivers – helping them achieve their highest ambition. Learn more: http://newsroom.woundedwarriorproject.org/about-us.