SAN ANTONIO, June 23, 2018 /PRNewswire-USNewswire/ -- When Larry Hinkle talks about Texas, the pride the U.S. Marine Corps veteran has in the Lone Star state is evident. 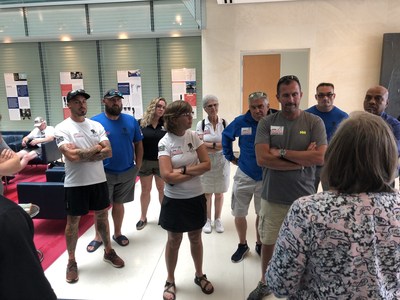 "I'm a fifth-generation Texan," Larry said, beaming about his home.

He is one of three American warriors selected to join three British veterans to walk 1,000 miles around the United States. Walk of America is designed to increase awareness of the needs of veterans in the U.S. and U.K. while also raising funds to help veterans service organizations provide for this generation of wounded warriors.

Larry recently walked into San Antonio with the five other veterans on the journey, ending the day's trek outside the Alamo, another source of Texas pride.

The six warriors' journey started in early June in Long Beach, California. After two weeks, the group had experienced multiple California climates while walking more than 100 miles. Week two saw the veterans of six U.S. and U.K. branches of service hike on to San Antonio.

"Getting to visit Brooke Army Medical Center and see warriors – that is a source of inspiration; that is who we are walking for," Larry said.

Week two also gave Larry a chance to share the pride of his home state.

"There is so much history in Texas, so much patriotism."

Larry is one of three Wounded Warrior Project® (WWP) veterans taking part in the walk. WWP partnered with Walking With The Wounded to raise awareness of the challenges warriors face while also providing an opportunity for the veterans involved. The two nations fought so well together as coalition forces in Afghanistan and Iraq that partnering to take on the invisible wounds of war seemed only natural.

"We've been in the same places, the same trenches. There is just an immediate connection."

Camaraderie from his days in the service returned through his bonds with other veterans in the Walk of America. Sunday, Larry and the group will participate in the start of an Astros game.

"I can't wait for the Brits to get a Texas-sized welcome in Houston."