WASHINGTON, May 2, 2018 /PRNewswire-USNewswire/ -- Wounded Warrior Project® (WWP) Soldier Ride® recently returned to Washington, DC for its annual events at the White House and Annapolis. This multi-day adaptive cycling event gave more than 70 wounded warriors and their caregivers a chance to connect, while challenging themselves physically and mentally. 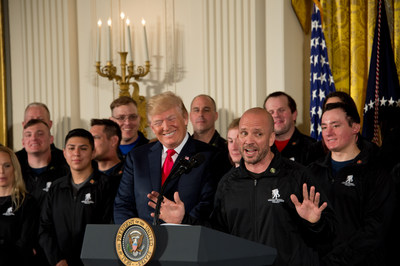 During his service in 2005, Erik was critically wounded by a sniper's bullet. His resulting traumatic head injury is so severe that he requires extensive caregiver support from his parents. But before Erik was shot, Deven made a solemn vow: "If something happens to you while you're over there, I promise to finish what you started." Deven kept his word and enlisted.

"I was in the 101st airborne, doing the same job my brother did as a combat engineer," Deven said. "Unfortunately, in 2008, me and my squad were ambushed. I got hit and ended up going into a long recovery."

In time, Erik and Deven were introduced to WWP and its Soldier Ride program, which empowered them to get outside of their comfort zones. Most importantly, it introduced to them to a supportive community and camaraderie that changed their lives forever.

Soldier Ride® is a Wounded Warrior Project® (WWP) program that empowers wounded veterans to push themselves beyond their comfort zones and begin their roads to recovery, alongside their fellow veterans. See how at https://woundedwarriorproject.org/programs/soldier-ride.