TULSA, Okla., Sept. 7, 2017 /PRNewswire-USNewswire/ -- Wounded Warrior Project® (WWP) relies on the support of donors, including individual supporters, corporate partners, and even groups of students. Some of those supporters even go on challenging adventures to raise awareness for WWP. Recently, Craig Clements and his two dogs began a cross-country journey on foot. 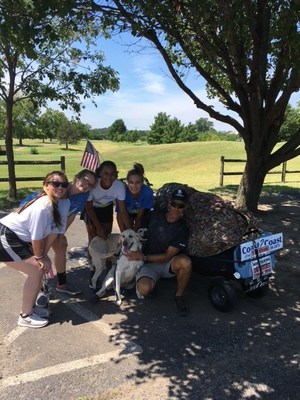 "My mother passed away 30 years ago from colon cancer," he explained. "Her father was a captain under General Patton and was injured severely in the Battle of the Bulge. But as many in that generation did, he returned home to make and rebuild America. Never once did I ever see him complain. He was my role model and was as close to a John Wayne figure as you could meet. I promised my mom that one day I would undertake something to honor my family's long history of war veterans from the Revolutionary War to current conflicts."

Craig said he always admired how WWP serves warriors, and he wanted to give back to them.

"Whatever that ended up being needed to be worthwhile," he said. "I spent several years researching what could I do to really make a difference that would not only assist current the generation of September 11 victims, but the next generation of men and women who will serve and sacrifice for this nation. That's why I am walking across the country spreading the word about Wounded Warrior Project at every stop."

Throughout the journey, Craig is meeting veterans, thanking them for their service, and compiling pictures, videos, and stories of his experiences.

"We sleep under the stars most nights and always ask permission from landowners wherever we rest our heads," Craig said. "I have found that we can meet entire communities this way and spread our message like a fireside chat. I can't begin to describe how many thousands of people we have carried the Wounded Warrior Project mission to. The response has been nothing short of incredible so far."

To see where Craig's travels will take him next, visit https://searanger3.wordpress.com/. And to learn more about how WWP's programs and services connect, serve, and empower wounded warriors, visit http://newsroom.woundedwarriorproject.org.