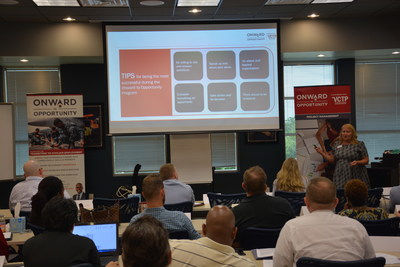 "I retired from the Navy in 2014, and I have been struggling to find employment since," Robert said. "Transitioning from the military can be a very challenging time for many vets."

Robert went back to school after retiring but found no career options, even after earning a master's degree in business administration.

"I realized I needed a certification in project management to get my resume noticed. I had already used my GI Bill."

WWP's partnership with the Institute for Veterans and Military Families' (IVMF) Onward to Opportunity opened new doors for Robert and other veterans and spouses during the recent event in Jacksonville. During the first four days of the program from IVMF, more than 40 participants learned about resumes, interviewing, networking, branding, financing, and other topics to steer them toward their next career. Representatives from more than a fifty organizations including Blue Star Families, Microsoft, Pelocity, Primerica, Department of Veterans Affairs (VA), and Berkshire Hathaway spoke to the group.

"These industry professionals give invaluable career advice we didn't get while in the military," Robert said.

"Wounded Warrior Project is also helping me generate a resume that will increase my chances to get interviews."

Following the four-day boot camp, veterans and spouses are enrolled in a free online program through Syracuse. They then take a certification test, also free of charge.

"With the skills and support I have gained, I know it is just a matter of time until I find the best career opportunity."