LOS ANGELES, Aug. 11, 2017 /PRNewswire-USNewswire/ -- It might be hard to imagine a bicycle race more iconic than the Tour De France, but in America, there's one race that's much more challenging. The Race Across America (RAAM) is not only 30 percent longer than the Tour de France, but it must also be completed in half the time. Finishing it is impressive in its own right – but for a team with an average age of 64, completing it under nine days is unbelievable. 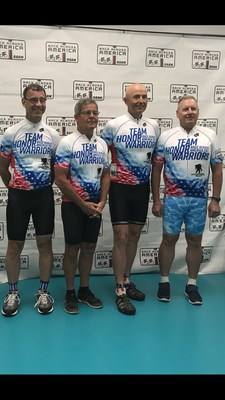 Yet, that's exactly what Randy Horton and his team did – but not just for glory and the adventure of a lifetime. Randy and his team did it to raise awareness and support for Wounded Warrior Project® (WWP) and the warriors it serves.

"It's true that just reaching the starting line of RAAM requires a lot of work and is half the battle," Randy said. "When you take that first pedal stroke, the adventure begins. While we were waiting for the signal to start, I noticed beach sand on the ground before us and many bicycle tire marks. As we rode across the U.S., the symbolism became clearer to me why those tire marks were so important. They represented all those who had gone before us, not only on our start day, but those through the years who were at the same spot as us."

Besides the members of Randy's team, competitors from 27 countries, including 10 world cycling champions, planned to face 175,000 feet of vertical climb with no days of rest in between. By the time the race ended, each team and competitor expected to have ridden 3,000 miles. Coast to coast – from Oceanside, California, to Annapolis, Maryland.

"We had a script in our minds about how the race would play out," said Michael Hunter, one of Randy's RAAM teammates. "None of that happened. In daylight, we saw the beauty of America's wilderness – the California and Arizona deserts, Monument Valley, Wolf Creek Pass, a beautiful dust storm, the Mississippi, and of course Gettysburg. We finished after a beautiful sunrise in a beautiful town – it wasn't in our race script, but in some ways, it was better."

To read the rest of the story, visit: http://newsroom.woundedwarriorproject.org/highlights?item=30647.