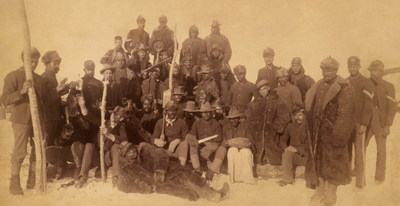 We know them as the Buffalo Soldiers.

"Of all citizens the Afro-American has a mighty interest at stake.... [since our] fondest and most cherished hopes for liberty and happiness are all centered in the institutions of our country....let us be ready and willing to do....even more than others in the hour of the nation's peril. Thus shall be reaffirmed our claims to equal liberty and protection." – Cleveland Gazette, March 5, 1898

1. A Cut Above – The Buffalo Soldiers were distinguished not only for their valor but their discipline. Alcoholism was rampant in the Army at that time, but not among the all-black unit.

2. The Blueprint – Anything less than absolute courage was not an option. Buffalo Soldiers boasted the lowest court-martials and desertion rates in the Army, despite racism and poor conditions.

4. Heroism By Any Other Name – The prevailing myth about the Buffalo Soldiers nickname is that its origins lie in the physical appearance of the black soldiers. Over time, a more likely explanation has emerged: the Comanche Native Americans christened the group in 1871 based on reverence for the buffalo and an abiding respect for the soldiers' peerless bravery.

6. Service Of A Different Kind – Between 1891 and 1913, about 500 Buffalo Soldiers earned coveted roles as protectors of Yosemite and Sequoia national parks.

8. Secret Service – Cathay Williams is the only woman known to serve with the heralded group.

For more information about the Buffalo Soldiers, visit http://newsroom.woundedwarriorproject.org/An-American-Legacy-Buffalo-Soldiers.