FORT WORTH, Texas, May 25, 2017 /PRNewswire/ -- For Kim Simmons, volunteering recently at Pat's Run was about giving back to all of the warriors who have served their country. 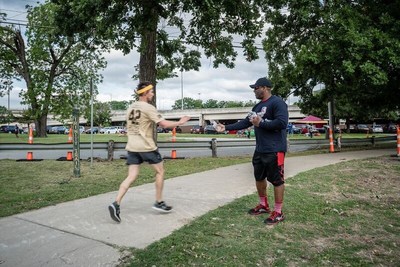 For Bryon Crawley, it was an opportunity to embrace his Army family.

The 13th annual run also allowed both to proudly represent Wounded Warrior Project® (WWP) on the 4.2-mile course. They joined other warriors and family members to encourage the runners while handing out water, keepsakes, and other WWP information to all veterans who supported the Pat Tillman Foundation scholarship fund.

"I believe a big part of Wounded Warrior Project is about giving back," Kim said. "We're a community, and the circle's big."

Veterans and their families enjoyed the opportunity to connect with their community while feeling empowered through helping others at the run.

The 2016 WWP Annual Warrior Survey highlights the importance of connection at WWP events. In the survey of the injured warriors WWP serves, more than half of survey respondents (51.7 percent) talked with fellow veterans to address their mental health issues.

Pat Tillman quit as a professional football player with the Arizona Cardinals following 9/11 to join the military and serve his country. The Army Ranger died in action in 2004, and his foundation was created later that year.

Programs and resources are free of charge to those WWP serves thanks to generous donors. Warriors are empowered to live life on their own terms, mentor fellow veterans, and embody the WWP logo by carrying one another along a path toward recovery.

Kim, the mother of Army veteran Storm Aguilar, fondly remembered a warrior who was running with a young service dog.

"He was one of the last runners because the dog, really a puppy, had to stop so often," she said. "But they both kept going. That's what it's all about."

To learn and see more about how WWP's programs and services connect, serve, and empower wounded warriors, visit https://newsroom.woundedwarriorproject.org/.