WASHINGTON, April 25, 2017 /PRNewswire-USNewswire/ -- When Army veteran James Myers first connected with Wounded Warrior Project® (WWP) three years ago in Hawaii, meeting the president of the United States was not something he expected to happen as a result. James recently joined 53 other wounded veterans in the East Room of the White House, to be greeted by the president, vice president, and the first and second ladies. The special ceremony was part of Soldier Ride®, a multi-day bicycling event that connects warriors with one another to help heal their bodies and minds. 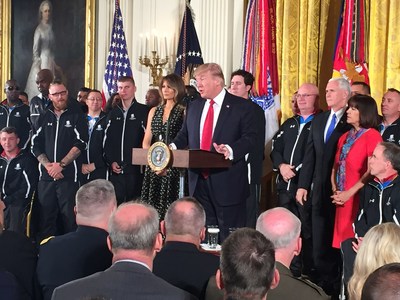 "When I lived in Hawaii, I went through a warrior transition program because I had a traumatic brain injury," James explained. "That's where I first got connected with Wounded Warrior Project, and they've been a big help for me with the events they do. Soldier Ride was something I had wanted to do for a while now."

Visiting the White House was only part of the Washington, DC Soldier Ride, though it maintained a proud tradition among United States presidents that began in 2008 with President George W. Bush and continued through 2016 with President Barack Obama. The day before, James pedaled alongside his brothers and sisters in arms through Annapolis, Maryland, and around the United States Naval Academy.

"Being here on this ride has been a real game-changer for me," James said. "I had forgotten how it feels to connect with other service members. This ride reminded me how good it is to be around people who served too, and who know some of the same experiences I've had. These are people I can sound off with and talk about what's happening in my life."

In a WWP survey of the injured warriors it serves, more than half of survey respondents (51.7 percent) talked with fellow veterans to address their mental health issues. Soldier Ride doesn't just push warriors physically – it challenges them to come out of isolation and approach their roads to recovery as a team, side by side with their fellow wounded veterans.

To read the rest of this story, visit https://newsroom.woundedwarriorproject.org/Wounded-Warriors-Forge-New-Friendships-During-Soldier-Ride-in-Washington. To find photos from this Soldier Ride, click on multimedia, then images.