Sleepless in the Service: 6 Tired Tales for National Napping Day

JACKSONVILLE, Fla., March 13, 2017 /PRNewswire-USNewswire/ -- Today is National Napping Day, a holiday that is observed annually the day following the return of daylight saving time. To commemorate this holiday, Wounded Warrior Project® (WWP) wanted to explore how some of our nation's veterans have benefited from naps. However, we asked for the most unique, funny, or outright ridiculous napping stories from their military services, like this one from Coast Guard veteran Casey O'Donnell. 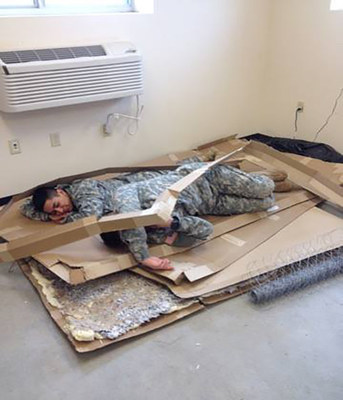 "On my first patrol in the Coast Guard, I had to shadow a few different people to learn what roles and responsibilities I would need to cover," Casey said. "This meant I had to cover multiple watches. I realized I had been awake for well over 30 hours. I was growing increasingly tired by the minute, and no amount of caffeine was helping at this point. We were underway on patrol off the coast of the Mexico-California border on a nice clear night. The ship was gently rocking back and forth, and my lack of sea legs made me walk around like a newborn calf. I was banging into things left and right and fighting to stay awake.

"I didn't want to appear weak, and I knew I would be made fun of if they found me sleeping, so I decided to take a quick power nap in the back of the engine room. It was warm and toasty in there, and I figured all I needed was 10 minutes to feel fresh and new again. With my head gently resting on a valve in the engine room, I figured I was out of the way of anyone just walking around. Sadly, I was sorely mistaken. The engine room is not a place to sleep. Apparently, it is a fire hazard and 'unsafe.' To say I was reprimanded would be an understatement. The worst part was the crew waking me up by yelling at me."

To read napping stories from other veterans, visit http://newsroom.woundedwarriorproject.org/Sleepless-in-the-Service-6-Tired-Tales-for-National-Napping-Day.