NEW YORK, Feb. 24, 2017 /PRNewswire-USNewswire/ -- A good day at work for Army veteran Danny Benitez is all about brains. Not learning something new, not just making smart decisions – actual, physical, brains. Danny works with researchers at a hospital in New York. For the past 30 years, doctors there have studied brains to find links to post-traumatic stress disorder (PTSD), traumatic brain injury (TBI), Parkinson's disease, Alzheimer's disease, and dementia. 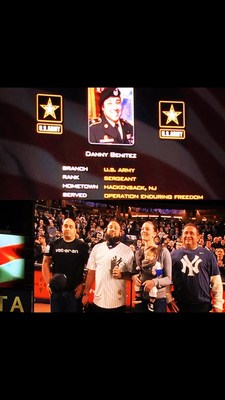 That's where Danny comes in; he responds to referrals and screens the individuals to see if they would be a fit. Then he has the unenviable task of approaching family right after the death of a loved one.

"It can be especially difficult when there is a sudden death or someone younger dies," Danny said. "Many families are willing to help, though, because the research can confirm diseases and help surviving family be aware."

The research hits close to home for Danny, who served seven years in the Army.

"I deal with PTSD, and there is no cure, but there are ways to combat it."

The nature of this job keeps Danny on the go, which he said helps. He also works from home a couple of days a week, keeping him better connected with family.

When Danny left the military, he had to transition from a familiar role to the unknown. He worked a couple of jobs but didn't find the right fit.

"After being unemployed for so long, you become doubtful for your future."

Then Danny saw an advertisement for Wounded Warrior Project® (WWP); he signed up and found hope. Danny started looking at job listings in the weekly email newsletter and connected with WWP's career counseling.

"Wounded Warrior Project helped direct me to new career options. They translated my military experience into a civilian resume. They then prepared me for job interviews."

Danny's role is to find suitable brains and approach families to approve the research, but sometimes there is more to his job.

"All organ donations are time-sensitive. So there have been times when I have to go collect the brain after someone has extracted it."

Read how WWP connects, serves, and empowers warriors across the country at http://newsroom.woundedwarriorproject.org.