HOUSTON, Feb. 16, 2017 /PRNewswire-USNewswire/ -- During the biggest night in football, one warrior served by Wounded Warrior Project® (WWP) was able to experience the action up close. While attending an event hosted by USAA® and the NFL, U.S. Marine Corps veteran Marcelino Gonzalez was chosen as the lucky winner for two free tickets – donated by the NFL – to Super Bowl LI. He and his wife enjoyed the game, close to the field – and another prominent attendee. 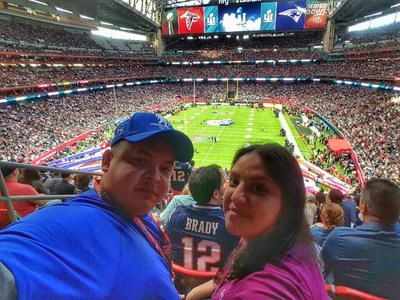 "The feeling of being there was surreal," Marcelino said. "Going to the Super Bowl is a once-in-a-lifetime opportunity. To experience it with my wife made it even better. My seats were in a great section, 40 feet from Vice President Mike Pence. It was an amazing game."

While Marcelino and his wife are both Texans fans, they decided to each pick a winner for the game, igniting a friendly rivalry that carried through the four quarters of play.

"I was going for the Falcons, and my wife was rooting for the Patriots," he explained. "We were both teasing each other – it looked like game over. So when the Patriots started coming back, I knew I was in trouble. I couldn't live it down for several days after the game ended. The whole event was a great way for us to have some quality time together and make memories."

The NFL also donated 50 tickets to warriors and their families to attend the Pro Bowl in Orlando, providing them an opportunity to connect with other veterans in their area. These bonds create important support systems that help warriors recover from the wounds of war.

Isolation is one of the most significant struggles wounded warriors deal with after serving their country. It can be difficult knowing how to overcome that challenge and rekindle bonds similar to those formed in the military. In a WWP survey of the injured warriors it serves, more than half of survey respondents (51.7 percent) talked with fellow veterans to address their mental health issues.

To learn more about this event, and Marcelino's experiences at the Super Bowl, visit: newsroom.woundedwarriorproject.org/Veteran-Served-by-Wounded-Warrior-Project-Wins-Tickets-to-Super-Bowl-LI.