CHICAGO, Jan. 27, 2017 /PRNewswire-USNewswire/ -- Wounded Warrior Project® (WWP) recently joined forces with Stack-Up, a charity organization that brings veterans and civilian supporters together through a shared love of video gaming, to host a game night for injured veterans. While video gaming often carries the stereotype of being anti-social, for many attendees it represented something completely different. 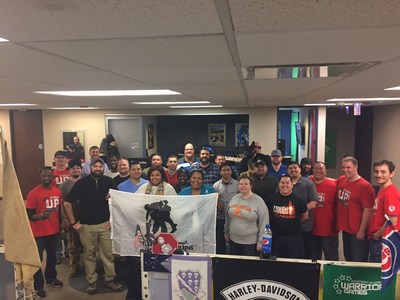 "A lot of people, including myself, love to play games in our free time," explained Marine Corps veteran Steven Philpott. "I've got many buddies who did that on their deployments, and that's how they stay in touch. I play with a lot of friends on Battlefield and Tom Clancy games, and we do it for the same reason. Think of it as a nine-hour interactive phone call with your closest friends."

For many veterans, the experiences they had in the military were some of the best of their lives, filled with fellowship, meaning, and direction. But upon return to civilian life, the isolation they face can be one of the most significant struggles wounded warriors deal with. It can be difficult knowing how to overcome that challenge.

Throughout the evening, warriors snacked on food as they gamed the night away on Xbox Ones, playing Titanfall and Call of Duty®, among other games.

During the evening, Steven said one encounter with a Vietnam veteran really changed his view on gaming – and staying connected with his fellow warriors.

"We had one guy who said his biggest regret was waiting until he got old to reconnect with his friends and fellow veterans," Steven said. "'I've lost a lot of friends' – that statement really hit me. It made me realize I need to do more to stay connected. Video games are a way do that – and so is attending Wounded Warrior Project gatherings like this."

In a WWP survey of the injured warriors it serves, more than half of survey respondents (51.7 percent) talked with fellow veterans to address their mental health issues.

To read more about the Stack-Up event at WWP, visit: http://newsroom.woundedwarriorproject.org/Wounded-Warrior-Project-Connects-Veterans-Over-Love-for-Video-Gaming.

To learn and see more about how WWP's programs and services connect, serve, and empower wounded warriors, visit http://newsroom.woundedwarriorproject.org/, and click on multimedia.