Life was going well for Jacob Cox. He was 21 years old and a member of the U.S. Coast Guard, serving his country out of Florida.

As the years went by, Jacob noticed something wrong with his vision, and it was not getting any better. The constant headaches worsened, his eyesight became blurrier, and finally, the increasing pain urged him to seek medical help.

Despite the challenges ahead for Jacob, he was determined to live his life by his favorite quote from motivational speaker Eric Thomas, “When you want to succeed as bad as you want to breathe, then you’ll be successful.” Jacob took that mindset to heart, and what happens next in his story is a true depiction of turning tragedy into triumph for himself and his country.

In March 2017, Jacob, then 29, received a full neurological screening at the hospital that revealed two brain tumors. The largest one was located at the front of his brain, pressing on his optic nerve, causing a lack of blood flow, resulting in his vision impairment and pain. He immediately underwent surgery, and the medical staff successfully removed this tumor. However, they could not remove the second rear tumor because surgery risked impacting Jacob’s mobility. The following year, Jacob completed three months of radiation and nine months of chemotherapy to treat the rear tumor. Although the procedures were successful, his vision remains permanently impaired. Jacob is completely blind in his left eye, while in his right eye, he is about 85% blind with no peripheral vision. The most difficult everyday tasks for him are reading and driving – which he cannot do alone. His military career as a Maritime Enforcement Specialist (ME2) was over, and life as he knew it changed. But a new chapter in his story was about to begin.

“The thought of being taken out of my military career at 29 was scary,” Jacob shared. “Knowing that I would never drive a vehicle again or ride my motorcycle… there’s a lot that went through my mind.”

The Power of Adaptive Sports Not letting his vision impairment slow him down, Jacob found adaptative sports through the Navy’s Wounded Warrior Adaptative Sports & Recreation program. It began with a phone call he received shortly after finishing chemotherapy, during a time when he had no idea what he would do next in his life.

“The Navy talked to me about transitioning out of the military and trying sports like cycling, swimming, and track,” Jacob said. “Meanwhile, I was thinking about where I was in my life, having just finished chemotherapy, where I wanted to be, and what was actually possible for someone like me.”

Through modified athletic opportunities with the Navy, Jacob learned how to run track with a guide, shoot archery and throw shotput while blindfolded, and cycle on a tandem bike with a partner, among other skills. His hard work, dedication, and perseverance led to Jacob representing Team Navy at the 2019 Department of Defense Warrior Games – a military Paralympic-style competition celebrating the resiliency and dedication of U.S. and international wounded, ill, and injured servicemen and women. Jacob came out winning – not only by medaling in every sport he participated in – but also by meeting fellow wounded warrior and Team Navy teammate Gabriel George. That connection led to even greater things, like both being selected to represent Team USA at the 2021 Invictus Games in The Hague, Netherlands, where Jacob medaled once again in almost every sport he competed.

“This possibility never even crossed my mind,” Jacob said. “Never in a million years did I think I would be competing in adaptative sports representing Team Navy at the Warrior Games and representing my country on the international level at the Invictus Games. Since adaptative sports, I have a stronger sense of purpose and the opportunity to help my teammates with their recovery process and goals.”

After meeting Gabriel, Jacob learned of the many ways Wounded Warrior Project® (WWP) helps connect, serve, and empower veterans. In February 2020, Jacob registered with WWP and quickly signed up for the first event that Gabriel suggested - a multi-day adaptative sports clinic for visually impaired warriors. Something special happened that weekend as Jacob was surrounded by veterans whose vision impairment ranged from completely blind to partially blind, like him. Jacob has continued attending different WWP events focusing on adaptative sports, skill building, and peer support. Through engaging experiences with WWP and adaptative sports, Jacob can build relationships, tap into more outlets and resources, and connect with other veterans. For warriors, connection and building camaraderie are essential in their healing journey because it helps them find purpose again. In fact, WWP’s Annual Warrior Survey found that the likelihood of experiencing PTSD symptoms is 57% lower among warriors who’ve maintained the social support of their military friends. 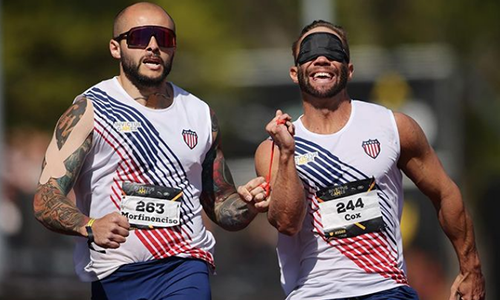 Jacob has spent the last few months training and preparing for the 2022 Department of Defense Warrior Games in Orlando. He will be competing for the second time, representing Team Navy alongside his friend Gabriel and many others he’s met along the way. Jacob will vie for a medal in the following sports: cycling, track, field, powerlifting, and archery. Specifically, Jacob hopes to beat the Warrior Games records for powerlifting in his weight class and visual impairment archery. The sky is the limit for him as he hopes to make the U.S. Paralympic Team one day.

<p style="border-width:3px; border-style:solid; border-color:#182694; padding: 1em; " text-align:="" center;"="">“There’s nothing I can’t do,” Jacob said. “My disability doesn’t define me, and I would’ve never known what I was capable of unless I said yes and put myself out there. There came the point where I told myself, ‘I’m going to stop saying no to things and start saying yes.’ That’s when things started changing for me. That’s all it takes for us vets to get the help we need. Because people want to help, we just need to be open to receiving it.”