In honor of Women’s History Month, we’re traveling back in time to 1861 and the start of the Civil War. This period in history is when Dr. Mary Edwards Walker helped change the face of medicine and was awarded the Medal of Honor.

Out of about 3,500 Medal of Honor recipients, Dr. Mary Walker remains the only female to receive the award. Walker’s medal was rescinded before she died and later reinstated, but first, let’s share the incredible story on the imprint she left in American history.

Born in Oswego, New York, Walker grew up in a progressive household with parents who encouraged independence, education, and justice, especially for women’s rights. Embracing her upbringing, Walker became determined at a young age to defy traditional feminine standards on a principle of injustice. From the clothes she wore to the work she performed, Walker often encountered criticism because she was everything a 19th-century woman was not. Never wavering, Walker saved enough money to pay her way through college, and in 1855, she graduated with honors from Syracuse Medical College, the only female medical doctor in her class.

Walker joined private practices for a few years before the Civil War broke out in 1861. Eager to join the war to serve as a surgeon for the Army, she traveled to Washington, D.C., where she met with disapproval simply because she was a woman. To no surprise, Walker did not take no for an answer.

Instead of packing her bags and returning home, she decided to seek other options by traveling from hospital to hospital to volunteer her services. She was offered the role of a nurse but declined knowing she had the credentials to be a surgeon. So instead, she asked to volunteer for the Union Army. The Army had no female surgeons at the time, and, at first, she was only allowed to practice as a nurse. All she asked for in lieu of money was a place to sleep.

She served in many battles where she treated the severely wounded in makeshift hospitals, including serving in the first major battle of the war, First Battle of Bull Run, in 1861. Later, she continued working unpaid at the Patent Office Hospital in Washington, and near the Union front lines, including the Battle of Fredericksburg. In 1863, Walker was finally appointed a paid position as the first female surgeon of the U.S. Army and served as a civilian-contracted assistant surgeon of the 52nd Ohio Infantry. Here, Walker frequently crossed battle lines into enemy territory to treat civilians who hadn’t received medical care in a long time. This act alone put her at great risk, especially because Walker would often be on her own. She would use this alone time to listen for any information on troop movements and bring the intel back to her commanding officer.

In April 1864, while on one of her journeys to help others, Walker was captured by Confederate troops and arrested for spying, although never admitting to it. As a prisoner of war, she was sent to several female military prisons for the next four months. Unfortunately, her health declined severely while in prison, ultimately damaging her lungs and eyes so badly that she couldn’t practice surgery again. Eventually, Walker gained freedom through a prisoner exchange. After the war ended, Walker desired to be a commissioned officer to validate her years of service. However, up to this point, there was no precedent for commissioning a woman. Thus, President Andrew Johnson instead awarded her with the Medal of Honor in November of 1865.

The terms of the Medal of Honor were broader then than they are today, which caused a lot of ambiguity. Walker opened the flood gates for fellow service members to write their congressman stating that they also deserved the award, which caused the military to create parameters around eligibility and requirements. By 1917, a review of the Medal of Honor awards resulted in 911 individuals being stripped of their award — including Walker.

Refusing to return the medal, Walker wore it every day until her very last on Feb. 21, 1919. It wasn’t until 60 years later, with the help of her descendants, that Walker’s medal was restored by President Jimmy Carter in 1977.

Today, her hometown features a life-size statue of Walker and a state senate proclamation declared May 12 as Dr. Mary E. Walker Day in Oswego. George DeMass, the Oswego town historian, played a role in making this commemoration happen.

“I was fortunate to know people who knew her,” DeMass said. “Ten years ago, we dedicated the statue, and last year, we decided to hold an impromptu ceremony for Medal of Honor Day. I realized then that this statue really brought her back to life.” 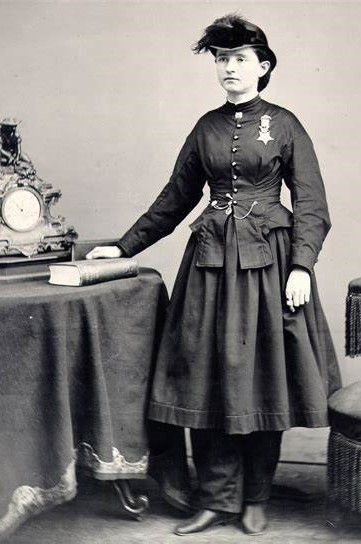 Aside from her wartime efforts, Mary Walker was a true pioneer and supporter of women’s rights. She became a writer and lecturer, advocating for health care, dress and election reform for women, and equal pay. Walker was also a dedicated member of the central woman’s suffrage bureau in Washington and a strong voice for women’s right to vote.

Throughout most of her life, Walker’s outfit was known as the “Bloomer costume,” trousers with suspenders under a knee-length dress with a tight waist and full skirt. More than once, she was arrested for impersonating a man, but she insisted on her right to wear clothing she thought appropriate and advocated that other women do the same. She was quoted at one trial stating, “Dress as I please in free America on whose tented fields I have served for four years in the cause of human freedom.” She was released, and the judge ordered police officers never arrest her on that charge again.

Despite the constant harassment, disapproval, and even arrests, she stayed true to herself and her wardrobe. Walker’s clothing was not just a statement, but a form of convenience for the work she wanted to do. A true believer in gender equality, Walker proved her worth through her work.

Dr. Mary E. Walker was a fearless leader who knew no boundaries or limitations. Many of today’s women veterans can relate to issues Dr. Walker faced, including not being seen as veterans or equals on the battlefield, even if they have the credentials to prove it. Still, Walker remains the only female recipient of the Congressional Medal of Honor.

“There were some that respected her and others who thought she was too eccentric,” said DeMass. “I’d like to call her a visionary. Dr. Mary was so ahead of her time and widely misunderstood. As years go on, people will realize more fully the impact she had on our society and culture. Like the quote on her statue says, ‘I’ve got to die before people will know who I am and what I have done.’”

Wounded Warrior Project® (WWP) research found that women warriors experience certain challenges at higher rates than their male counterparts to this day. In particular, the challenge of not being seen as a veteran is still being felt by women veterans across the country. To better understand these issues and advocate for women veterans, who make up about 10% of the overall veteran population, WWP introduced the Women Warriors Initiative. To learn more on how you can #EmpowerWomenVets, click here.