JACKSONVILLE, Fla., March 17, 2018 /PRNewswire-USNewswire/ -- Wounded Warrior Project® (WWP) supporters raise awareness and funds for the organization in many ways. Some have used their art to show the courage of wounded veterans; others have written songs and donated proceeds from the music. Anthony Martino put his technical expertise to work by making a unique, custom-designed gaming PC to auction on eBay. He plans to donate the funds raised from the auction. 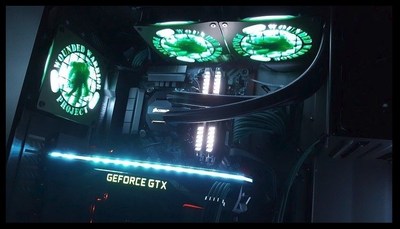 "I had no formal training on building computers," Anthony said. "I learned as I went. Back in the 1990s, I'd add a CD burner, a graphics card, a hard drive, or a processor. Eventually, I had done all the parts and just knew how to build an entire system. But in the past year I've really stepped up my game, building computers with specific themes that stand out from the boring boxes of yesterday."

A few examples of his handiwork are throughout his home: his wife received a custom Hello Kitty computer, and he also built a police interceptor computer with flashing red, white, and blue lights.

"After that, I was inspired to do a charity build for Wounded Warrior Project with a military theme," Anthony said. "Given the number of people close to me who have served, it was definitely a project I had a lot of passion for."

Many of Anthony's family members have served their nation; his father was in the Army, his wife's father was in the Navy, and his cousin was in the Marine Corps. The project was as much as about honoring their service as about giving back to an organization he believed in. Even the look of the computer was a love letter to the Armed Forces.

"I was inspired by the old WWII military vehicles with their olive coloring and white letters and graphics," Anthony said. "The Corsair C70 Vengeance case I chose was perfect, as it already came with the green color I wanted to achieve, and it had top clips for the side panel similar to an ammo box. The front features themed buttons on the case to continue the look."

To learn and see more about how WWP's programs and services connect, serve, and empower wounded warriors, visit our multimedia page.