JACKSONVILLE, Fla., Dec. 20, 2017 /PRNewswire-USNewswire/ -- Thousands of warriors pedaled thousands of miles in 2017 as part of Wounded Warrior Project® (WWP) Soldier Ride® events across America. For many, the event was an introduction to how WWP serves warriors, their families, and caregivers through free programs and services. Others were familiar with these resources, and the ride was yet another opportunity to connect with fellow veterans in their local communities. For others, it was the next step in an ongoing journey toward recovery by getting physically active again. 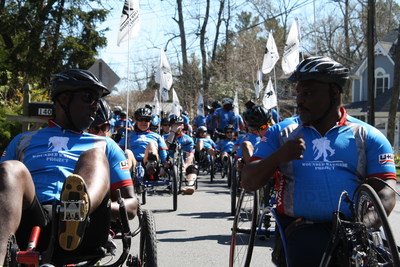 There was something for everyone at each of the 24 cities Soldier Ride visited. Each had its own unique stops, supporters, and landmark events. Just the same, each warrior made his or her own memories from days spent riding bicycles alongside fellow wounded service members. Over the course of the year, several wounded warriors shared what Soldier Ride means to them – whether it was getting on the bike for the first time, making a new friend, or even shaking the hand of the President of the United States at the White House.

Rose Jones, Army veteran: "In the civilian sector, people have a hard time understanding what it's like to live with the invisible wounds of war. When I get around my fellow veterans we pretty much all go through the same things, and we get what it's like to live with invisible wounds. That's why I love being part of this community. Ever since I joined Wounded Warrior Project, my life has changed for the better. It's one of the best decisions I've ever made."

James Myers, Army veteran: "I've made some friends for life during Soldier Ride. It turns out it's a small world too – one of the guys from my unit at Fort Bragg was there, and he's been over at Walter Reed. I'm definitely going to stay in contact with him. I was equally surprised by the people who came out to cheer us on. The American people really do appreciate us, and they're so happy we served. It was really great to see that."

To read more highlights from Soldier Ride 2017, check out http://newsroom.woundedwarriorproject.org/highlights?item=30921.