JACKSONVILLE, Fla., March 17, 2017 /PRNewswire-USNewswire/ -- Pop/rock duo BREAKERBOX recently announced its support for Wounded Warrior Project® (WWP) with the release of a tribute music video featuring its new single "Miss You." The music video features a montage of military service members and their families in various stages of life surrounding a warrior's deployment overseas.

"'Miss You' was originally written by Scott Calandra and myself about the loss of our parents," explained singer Christina DeNee. "I lost my mother at age 10, and Scott lost his father at 14. We wanted the song to capture that feeling of loss and missing someone. We were recently contacted by a mother whose son was a veteran of the war in Afghanistan, who sadly took his life after struggling to adjust to civilian life. She played 'Miss You' at his funeral, which moved us beyond words. It opened our eyes to a way we could possibly support suffering veterans who don't necessarily have a voice – except through organizations like Wounded Warrior Project. Scott and I have been supporters for a while now, and we thought this song could help bring peace to families and veterans and remind them that they are not alone or being forgotten."

Thanks to generous donors, WWP programs and services are offered free of charge to warriors, their caregivers, and families, and they assist with mental health, physical health and wellness, career and benefits counseling, connecting warriors with one another and their communities, and long-term care for the most seriously wounded.

"Wounded veterans having awareness about what support is available for their unique needs is one of the most important steps on the road to recovery," said Gary Corless, WWP chief development officer. "We're extremely grateful for BREAKERBOX and its decision to support wounded veterans while recognizing the efforts of Wounded Warrior Project in its music video. This generous act will bring more awareness to our cause – connecting wounded warriors with programs and services that will empower them to live their lives on their terms."

Premiering worldwide today on YouTube and VEVO, "Miss You" will also be available for download and streaming on digital retailers including iTunes and Spotify®. To learn more about BREAKERBOX, visit breakerbox.tv/. And to learn more about how WWP's programs and services connect, serve, and empower wounded warriors, visit newsroom.woundedwarriorproject.org/. 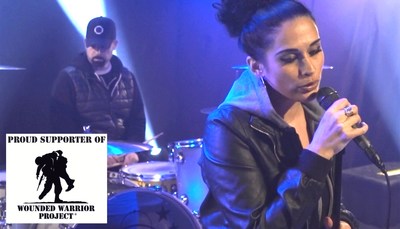