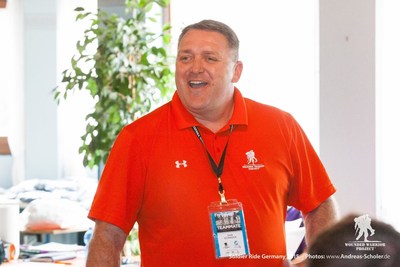 "I was deployed to Kosovo, Iraq twice – Desert Storm being the first time," Dan said.

"My brother told me about this organization, Wounded Warrior Project," Dan said. "I pored over woundedwarriorproject.org every day after work. I applied for 14 positions; I just wanted to be a part of this."

"I was immediately connected to all the stories of other veterans. I knew it was a place where I could lower my shields and be in what I call a platoon with like-minded people."

"I put my compensation packet in with the Department of Veterans Affairs, and more than a year later, nothing had happened. Wounded Warrior Project got involved, and within six months, they got it fixed."

"It was funny because it was nothing more than what we did as kids, riding bikes. I got involved and was struck by the passion to serve other brothers and sisters."

"The Alumni team goal is to connect warriors with one another, the community, and Wounded Warrior Project."

"It's not that we are going to reach every single individual across the country, but we're going to do our best to make an impact someway, somehow.

Read and see more about WWP's impact on warriors at http://newsroom.woundedwarriorproject.org.